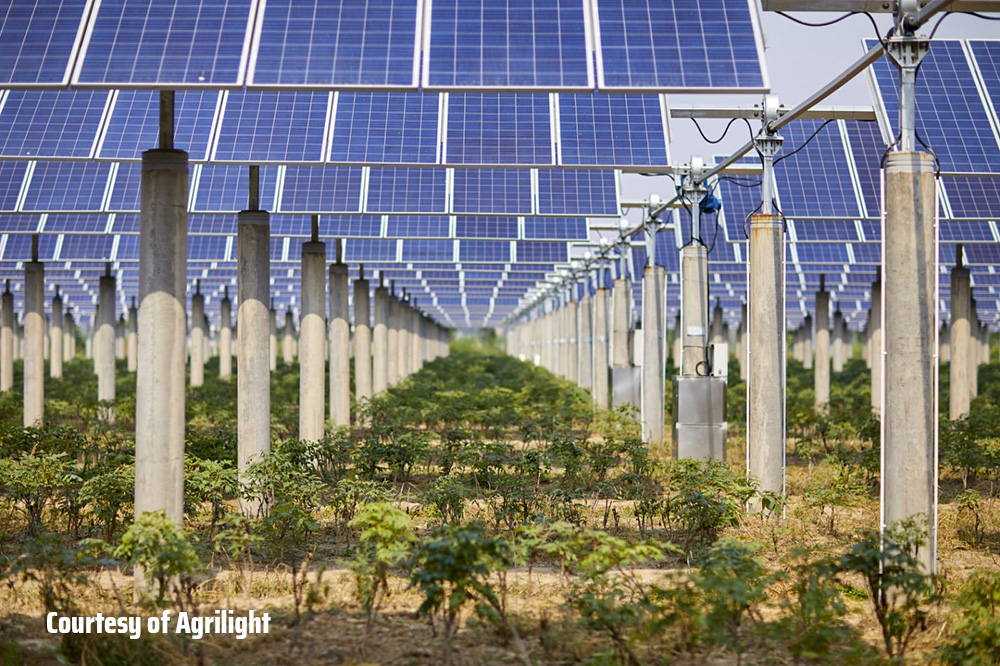 During the past two years, momentum has built rapidly for agri-photovoltaic (APV), the technology that allows agricultural land to be used simultaneously for growing crops and generating solar power.

The concept is simple: semi or non transparent solar arrays, with or without tracers, are installed on platforms above the crops, high enough that farmers can carry out their ongoing agricultural activities. Recent studies assert that installation of APV on 1% of the world’s arable land could fill world needs for electricity.

While no utility-scale installations have been carried out to date, tests in a variety of regions have provided initial data supporting the approach’s theoretical advantages: 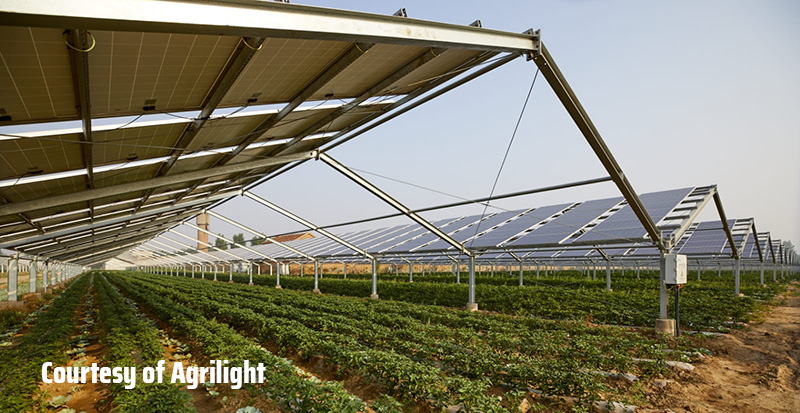 To achieve the agri-photovoltaics (APV) promise, it is necessary to scale up installations and to spread awareness and knowledge throughout the world. That will require overcoming of multiple challenges, ranging from fine-tuning of underlying technologies to optimizing installation and operational technologies, while generating extensive data on APV impact on crops and farming methods.

To facilitate and accelerate this process, Migal Research Institute is now launching its APV Knowledge Center.

Migal is uniquely qualified for this initiative due to its recognition throughout the world as an innovator of advanced applied agricultural technology, together with its location in Israel, the pioneer of solar energy generation. The Migal’s APV Knowledge Center is a natural outgrowth of Migal’s own extensive research in orchards, which is currently being used in farms growing avocados, bananas, grapes, kiwis and variety of deciduous trees, while using different shading methods to reduce radiation, stress and pests in the orchard.

We will work together in full cooperation with the farmers, the agronomiy consultants and all of the professionals necessary.

CALL FOR of the Israeli Ministry of Energy:

Apply for submission of preliminary plans for the dual use of renewable energies in agricultural areas. For more information in Hebrew: https://www.gov.il/he/departments/publications/reports/agro_voltai 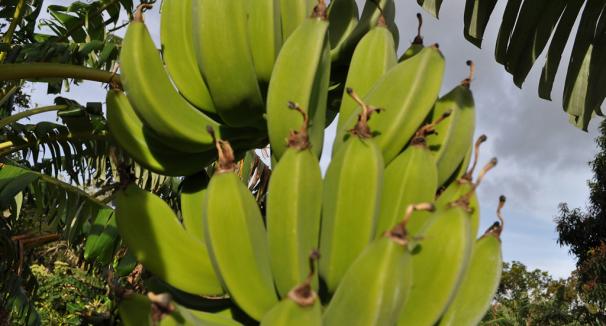 In the World of Bananas

Following the move in the banana sector to cultivation under netting providing a shading factor of 10%, as a means of protection against wind damage, in the year 2000 we saw a rise in yields along with savings of irrigation water.  In recent years we have been testing netting with a shading factor of 30% and with unique physical properties. We found that these nets have the potential to provide significant savings of irrigation water with significantly increased yield.

The findings of this research and our expertise in this sector of agriculture have enabled us to conduct a comprehensive study of the ramifications of installing solar panels and the effect on the physiology of the banana plant, growth factors, flowering and yields. 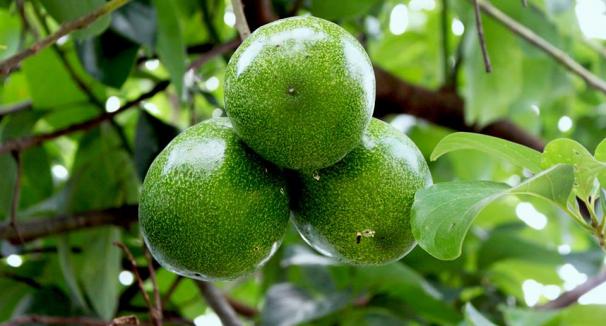 In the World of Avocados

Worldwide avocado production in 2017 stood at about 6 million tons over 5.9 million dunams. Despite the attractive qualities of this crop, avocados are especially sensitive to extreme climate damage that harms growth and as a result significantly impacts growers’ profits. As part of our comprehensive work in this sector, we examined the use of shade netting above the tree foliage. These shading nets provided significant protection from frost and cold, and we have initial evidence of their efficiency in preventing damage due to extreme heat. Therefore, our assessment is that the installation of solar panels over avocado orchards could assist in the efforts to cope with extreme climate damage, while providing optimal production of electricity. 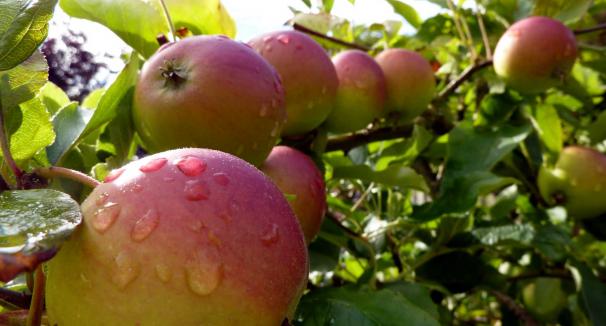 In the World of Deciduous Fruits and Specifically Apples

In deciduous orchards in general and specifically with apples, it was found that it is beneficial to cover the orchard with netting in order to reduce solar damage and improve the quality of the fruit. Today, in many orchards netting is used to reduce sun damage. The netting is a challenge for colorful fruit since they need short exposure to the sun during ripening in order to obtain their color. Additionally, in deciduous orchards, in the winter months there is no foliage and therefore one must direct the solar panels so that they cover most of the area for maximum harnessing of the winter sun.  The integration of solar panels in deciduous orchards could therefore lead to improvements in yield quality and profitability. 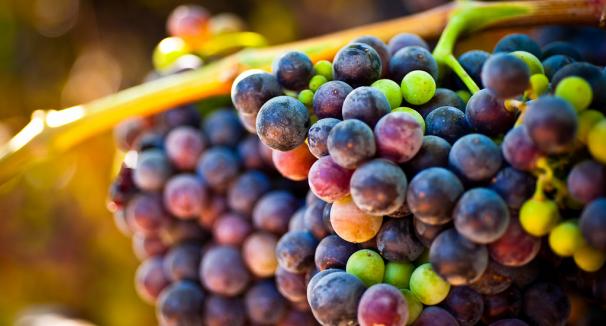 In the World of the Vineyard

Vineyard and grape orchards typically have relatively less foliage and are therefore extremely suitable for coverage with solar panels. At the same time, in vineyards the crop is for the most part industrial and space must be left for the passage of double row sprayers and harvesters. Therefore it appears that a solar structure will hurt the profitability of the vineyard. In table grape orchards on the other hand, the work is manual and an investigation of solar panels with a design adapted to expose the bunches to light under shade has great potential. 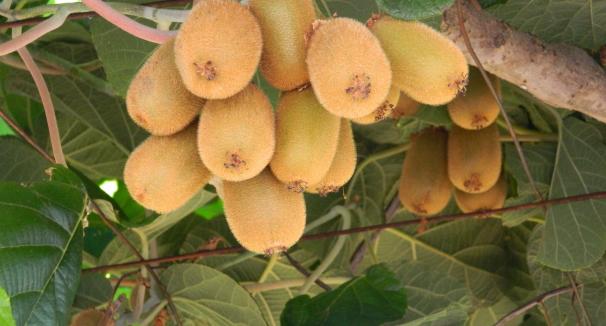 In the World of Kiwi Fruit

The Kiwi is a deciduous strain, whose cultivation is limited to the high areas in the north of the country, due to the need for cold environment. Moreover, the Kiwi is a vine and therefore sensitive to wind, but the use of shade netting to provide a solution for these problems hinders the work of bees and pollination and therefore reduces crop yield. We believe that solar panels will also provide a solution for the wind problem, and will be beneficial for the water regimen without affecting pollination.

Our accumulated experience and the Collaborations we create with companies engaged in agrovoltaic ventures, give us the ability, the knowledge and the experience to launch agrovoltaic pilot ventures and assist with the definition of specifications. 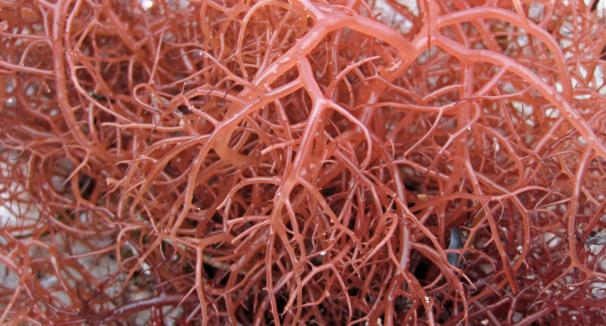 In the World of Algea

The global seaweed industry annually produces over 30 million tons of algae with a total value of over $ 10 billion and is expected to double by January 2030.

The Gracilaria algae, for example, is being used mainly to produce food agar, but also as a fresh and dry edible vegetables as a source of protein, for creating an ingredient for the cosmetics industry, or as sunscreens. It has also been found that Gracilaria has biological-medical activity such as antimicrobial, anti-inflammatory, and anti-viral substance.

One of the ideas for improving algae growth is to create an array of solar panels that will meet the increased demand for alternative protein. Furthermore, changing the light conditions by using the solar panels has the potential to enrich the amount of protein in the algae  and its bio-active compounds.

We invite you to contact us to hear more about our concept and technology, to brainstorm together about the services we can offer for your initiative, or to join our team.