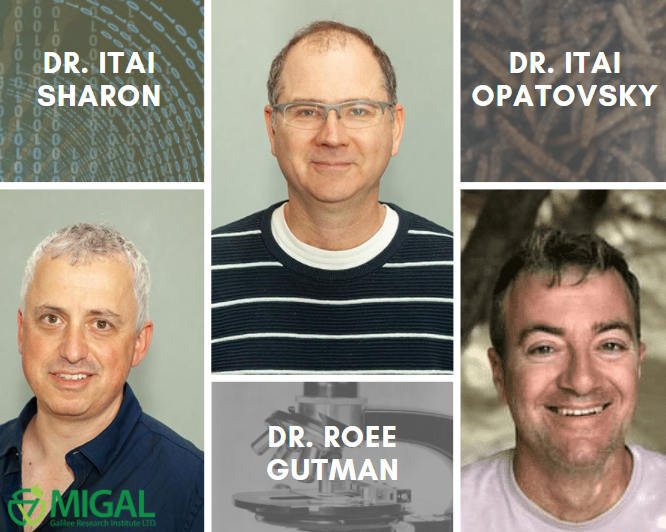 We are excited to share with you the achievement of three researchers from MIGAL- Galilee research Institute in the prestigious ISF grant.
ISF, the National Science Foundation, has been a leading force in different research fields in Israel for several decades, and supports a wide range of research areas, including exact sciences and technology, life sciences and medicine, humanities and social sciences.

Happy to present the winning researchers:

- Dr. Itai Optovsky on his research on the metabolic effect of fungi on insects in a rotten environment.
The understanding of the metabolic interactions between eukaryotic microorganisms (e.g. fungi) and insects is lacking and very complex to study. As the metabolic complexity and ability of eukaryotic microorganisms is intense, they have the potential to dramatically affect the insects' physiological condition. Dr. Optovsky's group is working on a model for fungus-insect interactions based on the black soldier fly (BSF) (Hermetia illucens L.), an omnivorous detritivore found mostly in dumpsters and compost in urban areas. Revealing the exact metabolic activity and potential of the specific fungal species found in the BSF larval gut will provide novel knowledge regarding the complex metabolic interactions between these two eukaryotic groups.

- Dr. Roee Gutman, on his research exploring whether high-fat-diet-induced obesity is related to the gap between period lengths of the endogenous circadian rhythm and the environmental photic cycle.
Endogenous rhythms oscillate at a period length (tau) that usually diverts from 24-h, yet are readily entrained to the near-tau light-dark cycles (T-cycles). Metabolic disruptions are secondary to circadian disruption; specifically, high-fat diet-induced obesity (DIO) follows high-fat diet-induced circadian disruption. Accordingly, both phenomena are reversed by time-restricted feeding (TRF), even on a high-fat diet without caloric restriction, restoring circadian rhythms. Tau-T-cycle deviation correlates with DIO rates and inversely with lifespan. These results support Roee Gutman's hypothesis that high-fat diet-induced metabolic disruption under the 24-h T-cycle is due to a 'double-hit' process. The first hit makes homeostatic systems vulnerable to perturbation due to the entrainment of endogenous rhythms to a slightly tau-diverting T-cycle. The second hit results from ad-libitum feeding on HFD, which disturbs circadian homeostasis. Dr. Gutman’s group is working on examining this hypothesis. This pathway may provide a novel experimental paradigm for developing clock-related therapeutic agents to reduce the tau-24-h deviation and increase the robustness of endogenous cycles. These enhanced rhythms may especially attenuate DIO and metabolic syndrome rates among shift workers, who routinely entrain to new T-cycles, and this may occur even without caloric restriction or TRF.

- Dr. Itai Sharon on his research regarding the development of computational methods based on meta-genomics to characterize microbial populations and to examine the variability and dynamics in these communities in the soil.
Soil microorganisms play key roles in global processes such as the global carbon and nitrogen cycles. These microbes also support plant growth in both natural and farming environments. Studying the soil microbiome is a challenging task due to the enormous number of microbial species in every gram of soil, estimated to be in the range of tens of thousands
Metagenomics is a culturing-free technique that facilitates the study of the diversity and dynamics in microbial communities. The decrease in DNA sequencing costs and the development of assembly and binning methods now facilitate the recovery of metagenomics assembled genomes (MAGs) from metagenomics samples. Soil remains poorly characterized due to its complexity and the large amount of sequencing data involved. Dr. Sharon’s group develop methods for metagenomics binning and community profiling that can scale to deep soil metagenomes.

Our gratitude to the National Science Foundation (ISF).